four numbers that tell a story

In what are now called Agile Methods for software I had the priviledge of sitting at the feet of the great Tom Gilb in 1980s and then, in 1990s, Ward Cunningham, the genius behind Software Patterns, Extreme Programming and Wiki. Tom and Ward taught me to do the Simplest Thing That Could Possibly Work in each step of a development. Towards the end of 2011 I've been thinking about an analogous question: what's the simplest way of explaining to someone with an open mind that there is something lacking in the accepted wisdom on climate change?

The answer came by a kind of accident. On 23rd November I visited a small internet startup near Old Street and met some of the developers, one of whom was speaking that night at the London Node User Group in Camden. I decided to make my first appearance at LNUG, which I'd learned from Andrew Nesbitt at Ruby Manor three weeks before has been modelled on the excellent London Ruby User Group. There was an impresssive turnout and I heard much about Node.js itself and the remarkable progress of CoffeeScript. In the pub afterwards I got talking to a developer for another Silicon Roundabout startup who'd done Politics, Philosophy and Economics at Oxford. At some point I indicated that I didn't think the conventional story on man-made global warming was as strong as was often made out. My interlocutor was surprised. Here's how I explained the situation.

All these are going up, right? Wrong. The first three are going up, a fact we are continually reminded of in the media. The last one has been falling since the 1920s: 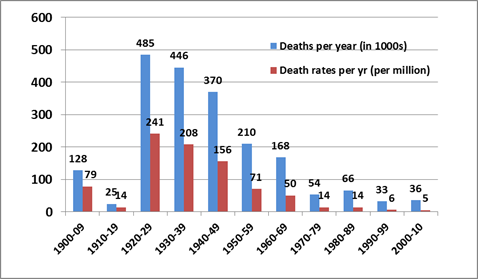 But who is aware of that?

OK, my friend said, but surely the reduction is due to changes in technology.

I said of course. And so are our emissions in the first place. What this shows is that we are winning the battle. It's not a crisis. He looked thoughtful.

Why haven't we heard?

There is in fact a broad academic consensus that however climate has been changing in the last century it has not been making extreme climate events worse. But when the time came for the United Nations' prestigious Intergovernmental Panel on Climate Change to report on extreme events, releasing its Summary for Policy Makers in November - five days before LNUG, the reason it was fresh in my mind - they chose to mention deaths from such events in one paragraph only and that to highlight that 95% were in developing countries, in the period 1970-2008. No mention of the considerable decrease globally since 1920s. And this report is meant to be the last word on the subject for policy makers for many years.

Who apart from avid readers of climate sceptic blogs knows that the fourth number has been coming down for so long? Isn't that slightly important for informed decision making? My new friend seemed to think so.

One thing I didn't raise last month is the way the fourth number sheds light on bogus reasoning about causation between the others. Often the fact these three have been going up together is presented as evidence that man's emissions must be causing global temperature rise. But if temperatures have been increasing since the 1920s and deaths from extreme events falling in the same period one could equally well argue that higher temperatures cause milder extreme events.

False reasoning in both cases, because there are so many other possible factors. Back to the drawing board, for the ordinary voter and for policy makers. And a Happy, more Hopeful New Year to every reader!